Posted on January 27, 2014 by alanamarie26
I started looking for a new planner before christmas. Not many stores to buy local here but I searched anyway. I didn’t really find anything I really liked. I have looked high an low on the internet and I kept coming back to Erin Condren. I really didn’t want to spend $50 on a planner, but I really liked it, and I had read such amazing things about it. One of my biggest problems (besides the price) was that I didn’t know if I would use it the whole year. I found that lots of people say the same thing, they aren’t loyal planner users and weren’t sure they could stick with it, but I found several “update” reviews where they had talked about how they continued to use it and enjoyed it. So I decided to take the leap.
I ordered on January 7th, it shipped January 15th and arrived today, January 21. 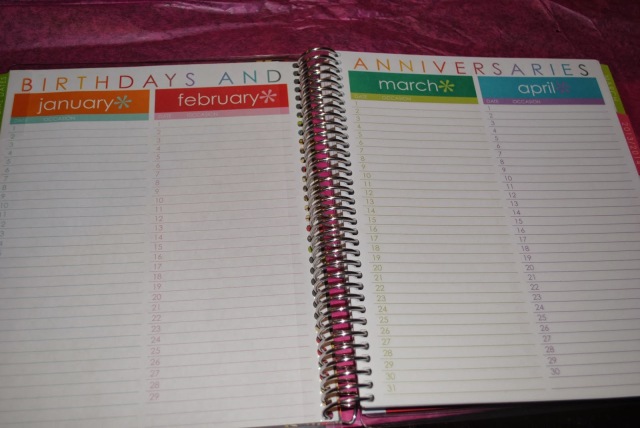 2 things.
1. Knowing now that it’s a 2 week turnaround I would have asked for my planner to start on February. The one I received starts in the month of January but actually the very first page is the last week of December and it goes until the end of December 2014. So I am thinking if mine started in February, the first page would have been the last week of January, and it would extend 12 months until January 2015. That would have been perfect.
2. It’s smaller than I thought it would be. I expected that it would be the size of a standard notepad 8×11 inches but it is 7.25 x9.25 I don’t know why I thought it would be bigger, because it even says the size on the product listing. But I am happy that it’s smaller than I thought, this will fit much better in my purse or diaper bag.
If you are interested in an Erin Condren product you can get $10 off through her “Refer A Friend program”  ← by opening a new account through that link both you and I get a $10 credit! Sweet!
*I was not compensated to write this review, these are my own ideas and I paid for my own product*

Marine Wife, Mom, Student. Trying to keep a household running while going to school full time.
View all posts by alanamarie26 →
This entry was posted in Product Review. Bookmark the permalink.